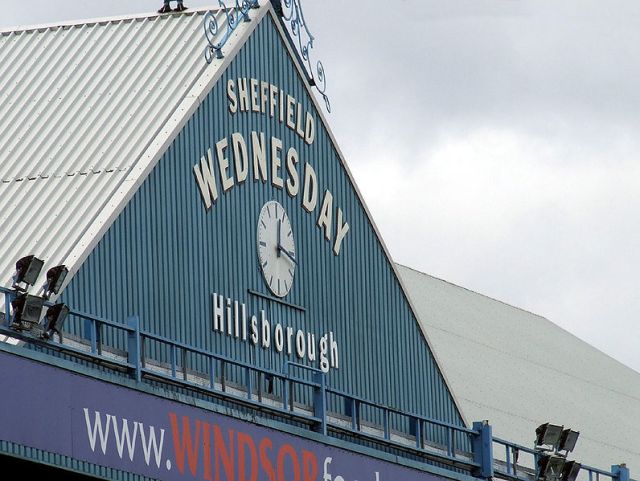 The Hillsborough Clock by Daniel Bagshaw

Wigan produced an emphatic demonstration of their play-off credentials with 3-0 victory at Hillsborough tonight.

Two goals by loanee striker Nicky Maynard in the first half and an injury time strike by Marc-Antoine Fortune secured a valuable three points in their promotion push.

Sheffield Wednesday had been unbeaten in eleven games in all competitions prior to the fixture and Wigan were looking to bounce back quickly from Saturday’s disappointing defeat at Huddersfield Town.

Wigan were once again without top scorer Nick Powell as Uwe Rosler shuffled his line-up from Saturday’s game with James McClean, Nicky Maynard and Chris McCann coming in.

Latics made the early running with Ben Watson firing wide of the target after good work by James McClean, and the Republic of Ireland winger went close a couple of minutes later when his shot was narrowly wide.

The Owls wasted a good opportunity on 27 minutes when Atdhe Nuhiu’s tame shot failed to trouble Ali Al Habsi in the Wigan goal.

Latics went ahead on the half hour mark when Waghorn set up the on loan Cardiff striker Maynard and his right footed shot found the bottom left corner of the Wednesday net.

Following a spell of pressure Latics doubled their lead on 38 minutes.

Waghorn’s whipped left footed corner evaded the Wednesday defenders and seemed to go straight in at the near post but Maynard was later credited with the goal and must have got the final touch.

Wigan went in search of a third goal as McClean drove forward on the left hand side but although his final cross evaded Chris Kirkland in the Wednesday goal, no Latics player could capitalise on the good work.

As the first half ended the home fans were becoming restless as Wigan went into the break with a deserved two goal lead.

Wednesday improved in the second period and started to exert pressure on the Latics goal.

The double substitution of Antonio and Helan coming on for Maghoma and Afobe seemed to give the home team impetus and almost immediately Helan forced a good save from Al Habsi.

Lavery came on for the injured Semedo and started to run at the Wigan defence and Nuhui headed wide from close range.

Substitute Fortune, on for McClean, was holding the ball up well and Wigan threatened on the counter attack.

As the match moved into last ten minutes of normal time, the Owls looked like they might pull a goal back but for some wayward shooting and the heroics of Al Habsi.

But it was not to be for the home team, and it was Wigan who sealed the points in the 92nd minute when Maynard dribbled into the box and his shot was parried by Kirkland and Fortune was on hand to shoot high into the Wednesday net.

The result moves Wigan up to ninth place in the Championship table with a game in hand on most of their rivals. The play-off spot that looked an impossible prospect in the final days of the Owen Coyle regime now looks like an attainable goal under Uwe Rosler.