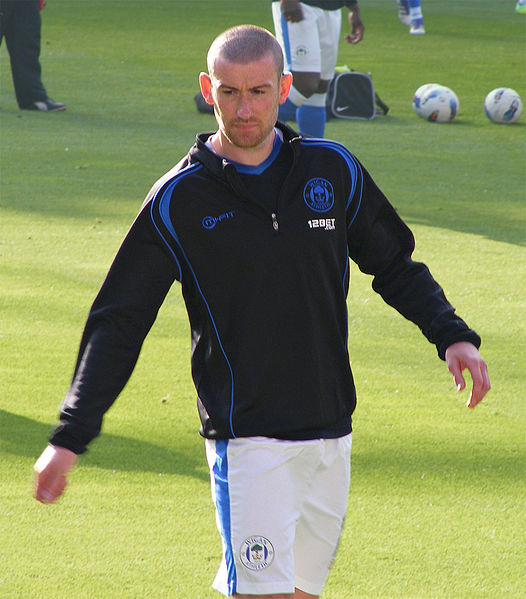 Wigan continue to make good progress under new manager Uwe Rosler but were held 0-0 at home to high riding Burnley on Sunday. The Latics dominated possession and created the majority of the chances but lacked the killer touch to take all three points.

Former Wigan midfielder David Jones nearly gave the Clarets the lead when his powerful strike was pushed on to the bar by Ali Al Habsi.

Wigan’s former Burnley midfielder Chris McCann also nearly got on the score sheet when he had a header cleared off the line.

Rosler made five changes from the 0-0 draw against Birmingham as Emmerson Boyce and Nick Powell returned from injury, with Stephen Crainey, Jordi Gomez and Marc-Antoine Fortune coming into the starting line-up.

Wigan started brightly and could have taken the lead early on. First when Leon Barnett connected with Stephen Crainey’s free-kick, but missed the target from a good position and then from a Crainey corner McCann’s goal bound header was cleared off the line by a Burnley defender.

However the Clarets looked like they had gone ahead just before the interval when Jones’s right-foot strike looked destined for the top corner but Al Habsi touched the ball onto the crossbar and in the resulting melee Leon Barnett managed to clear with Vokes about to pounce.

Wigan dominated the second period with only rare counter attacks from the Clarets, but they found clear-cut chances difficult to come by against a well-drilled Burnley back line.

Substitutes James McClean and Roger Espinoza replaced Fortune and Gomez. Rosler also gave former Brentford loan man Rob Kiernan his debut in a Latics’ shirt and the Republic of Ireland Under 21 international made a good impression in the final ten minutes.

Nick Powell probably had Wigan’s best chance to grab all three points in the 76th minute but he drove his angled effort into the side netting from about ten yards out.

Both managers seemed relatively pleased with the result in the post match analysis. As Wigan approach the half way mark in their season there are clear signs of improvement under the new manager. Rosler’s major concern will be the lack of a regular goalscorer, unless they can improve in this area they will find it hard to rise above mid table.

Latics biggest challenge so far this season is likely to come at high flying Derby County on New Year’s day.