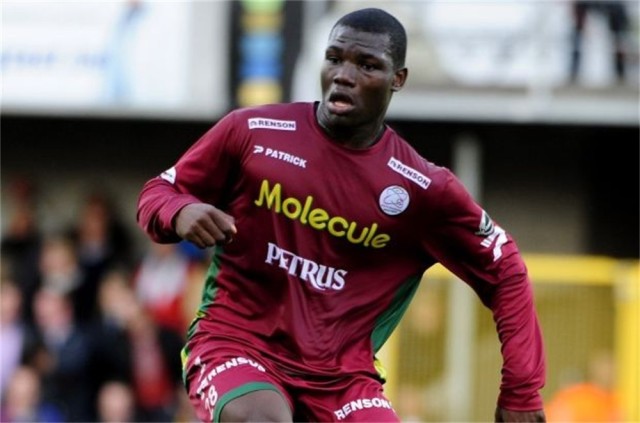 Wigan’s hopes of qualifying for the last 32 of the Europa League were dealt a severe blow when they went down 2-1 at home to SV Zulte Waregem. A late Junior Malanda strike sealing the three points for the Belgians who are now in prime position to finish in second place in Group D.

Wigan had taken an early lead through a Leon Barnett volley but Zulte equalised after a mistake by young Wigan keeper Lee Nicholls allowed Thorgan Hazard to score on 37 minutes.

Wigan had been on top for long periods and created many opportunities to increase their lead but as the game ticked towards the final whistle Zulte produced a slick counter attack and Malanda swept home from the edge of the area to give the Belgians the vital three points in their quest for qualification.

Manager Owen Coyle once again decided to rotate his squad with five changes from the team defeated by Brighton at the weekend.  Nick Powell was the designated central striker with James McClean and Callum McManaman the wide men. Both Grant Holt and Marc-Antoine Fortune had to settle for places on the bench.

Wigan started much the brighter of the two outfits and could have scored when Emmerson Boyce narrowly failed to make contact with Jordi Gomez’s chipped free kick.

But they did take the lead on seven minutes when Gomez’s shot from McManaman’s cross fell to Barnett who finished with some aplomb from the edge of the area.

Latics continued to press and it was looking likely that they would add to their lead when both James McArthur and James McClean forced saves from the Zulte keeper Sammy Bossut.

But against the run of play Zulte drew level following a series of Wigan mistakes. As Wigan were pressing up the field James McArthur received the ball in the visitors half but instead of playing the ball forward he inexplicably lofted the ball back towards his own goal and set up a Zulte break away.

The Wigan defence managed to slow the attack but just as it looked like the danger had passed Thorgan Hazard was allowed to fire in a shot which Nicholls somehow contrived to slip between his fingers and into the net.

Latics went into the half time break disappointed that they had not made their dominance count and they had let the Belgians back into a game which should have been out of their reach.

The second period was to be a more open encounter with chances at either end. Wigan continued to create some good opportunities but the Belgians were always comfortable in possession and looked dangerous on the counter attack.

Hazard had a couple of efforts for Zulte and Nick Powell was proving to be Wigan’s most effective attacker.

McArthur saw his low shot from the edge of the penalty area skim the upright but it was the visitors who got the all important final goal.

The powerful central midfielder Malanda was given too much space by Chris McCann and he made no mistake with his shot which sent the Zulte bench and travelling supporters into delirium.

Wigan can still qualify but they must now beat Maribor in Slovenia in their final group game and hope that Rubin Kazan, who have already qualified as pool winners, beat Zulte in Belgium.