No glamour ties for Wigan in Europa League draw

For those of us who have followed Wigan Athletic from their non-league days seeing the club in today’s Europa League draw in Monaco was quite a surreal experience. Little Latics in a draw with famous names such as Lazio, Valencia, Bordeaux, PSV Eindhoven, Dynamo Kiev and Eintracht Frankfurt was something to savour. Unfortunately, the draw made by Portuguese defender Ricardo Carvalho and former Italian defender Ciro Ferrara was not kind to Wigan.

The draw for the group stages of the competition paired Latics in a group with Russians Rubin Kazan, Slovenians NK Maribor and SV Zulte Waregem from Belgium.

Latics fans will be disappointed that their travel costs will be substantial if they are to take in all three away fixtures. The distances and costs of travelling to Russia and Slovenia are likely to be prohibitive, so SV Zulte Waregem in Flanders is likely to be the preferred destination for fans hoping to take in an away Europa League fixture.

Despite the less than glamorous draw Latics will be hoping they can progress to the knock-out stages of the competition, but playing Thursday nights in the Europa League and Sundays in the Championship will not be an easy task.

Rubin Kazan have experience in European competitions including the Champions League and won the Russian Premier League championship in 2008 and 2009. They won the 2011–12 Russian Cup and have recently moved into the 500 million euros Kazan Stadium below. 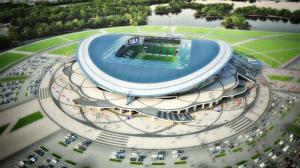 Following the 2008–09 season they became the dominant force in Slovenian football for the second time, having won three out of four championships since then. They are the only Slovenian club and one of only four clubs from the former Yugoslavia to have participated in the group stages of the Champions League and the Europa League.

Sportvereniging Zulte Waregem play in the West Flanders region of Belgium. Their highest ever finish was a 2nd place in the Belgian First Division last season. They have won one Belgian Cup and subsequently qualified for the 2006-07 UEFA Cup, only to lose in the round of 32 to Newcastle United.

SV Zulte Waregem Stadium not up to UEFA Standard.

This season they were in the Champions League at the third qualifying round but were eliminated 5-0 on aggregate by Dutch giants PSV Eindhoven.

The Belgian League runners-up then entered the Europa League play-off round, beating APOEL (Cyprus) 3-2 on aggregate.

The home fixture against Latics will be played at the FC Bruges’ Jan Breydel Stadium because the home stadium is not up to UEFA standard. 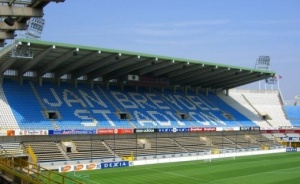 Group stage fixtures will take place on the following dates: