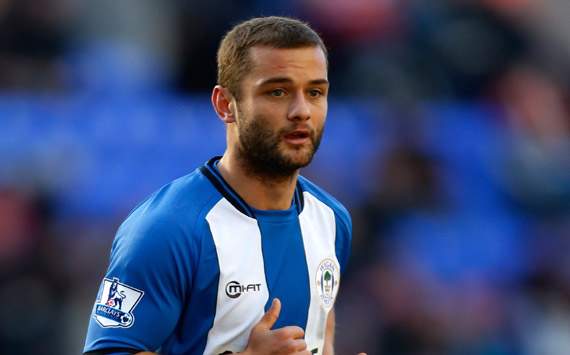 Quality will get always get you through and it was Shaun Maloney’s quality that rescued what could be an all important point for Wigan at Loftus Road. Maloney’s superb 94th minute free kick gave Wigan a last minute lifeline in a game they should have put to bed in the first half.

QPR had been reduced to ten men from the 20th minute when Bobby Zamora was red carded for a reckless high challenge on Jordi Gomez. But Wigan could not capitalise on their possession and dominance and they looked to have sacrificed all three points when Loic Remy broke away to give Rangers an unlikely lead in the 85th minute.

Wigan retained the same line up from their previous run of three victories and went into the game in a confident mood but the hard and uneven surface did not help Wigan’s normal passing game. It was the home team who had the first chance to open the scoring when Remy rifled his shot against Joel Robles right hand post.

Callum McManaman posed a threat down Rangers right hand side and fired one shot just over the cross bar and one driven shot narrowly wide of the Rangers goal.

In the 20th minute a moment of madness by Bobby Zamora changed the complexion of the game. His dangerously raised boot caught Jordi Gomez in the side of the face and after a long deliberation referee Phil Dowd sent off the Rangers striker.

Following the sending off Wigan dominated possession and spent the rest of the half camped in the Rangers half. However despite having a man advantage they were unable to penetrate a resolute QPR defence.

The second half continued with Latics having the greater share of possession but were seemingly incapable of scoring. Substitute James McArthur had a glorious opportunity on 76 minutes when unmarked in the centre of the goal he headed straight at Julio Cesar.

Latics continued to press, but it was from a Wigan free-kick on the edge of the Rangers box that the home side took the lead with five minutes to go.

Maynor Figueroa’s free kick was blocked and fell to Mbia who raced almost to the edge of the Wigan area before finding Remy to his right, the Frenchman produced an unstoppable shot past Joel Robles. It was a sickening blow for the Latics after they had been so dominant.

But Wigan were not to be denied and after Mbia fouled Maloney on the edge of the area, he stepped up to bend the ball over the wall Messi like into the net.