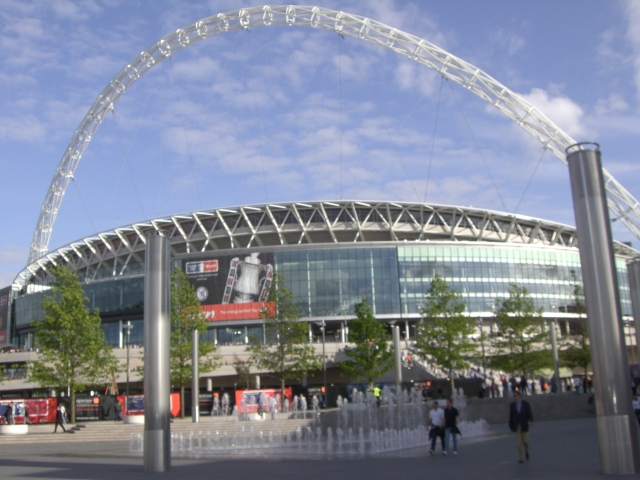 Wembley beckons for the Latics

Wigan are in dreamland after they produced a stunning 3-0 victory over Everton to reach their first ever FA Cup semi final. An incredible three goals in the space of three first half minutes swung the game inexorably in Wigan’s favour. Maynor Figueroa headed home from a Jordi Gomez corner before Callum McManaman and Gomez completed the rout to send Wigan’s 2,500 travelling fans into delirium.

Wigan may not have the superstars of some other clubs but their players showed great character and determination to reach Wembley when they outplayed higher placed opposition on their own patch.

Right from the kick off it was Wigan who took the game to Everton. As early as the 10th minute Shaun Maloney curled a sweet effort onto the right hand post with Everton keeper Jan Mucha frozen to the spot and soon afterwards Arouna Kone headed over from six yards out after good work by Maloney.

Everton had a couple of half chances through Sylvain Distin and Nikica Jelavic but the tide was in Wigan’s favour and they deservedly took the lead on 30 minutes when Figueroa headed home at the back post after a deep corner by Gomez.

Within a minute Wigan went two ahead when a poor pass by Phil Neville let in Callum McManaman and the former Everton schoolboy player finished with great aplomb.

Latics were in complete control and they put the tie beyond Everton a minute later when Gomez sublimely side footed the ball past Mucha after being well set up by Kone.

For a moment there was a feeling of disbelief amongst the Wigan fans, could they really be winning 3-0 at Everton after 33 minutes and heading to Wembley? But reality soon dawned that they would indeed be heading to a historic first ever FA Cup semi final.

At half time the shell-shocked Everton manager David Moyes sent on an extra striker Victor Anichebe in a desperate attempt to get back into the game but it was a forlorn effort as Wigan maintained their grip on proceedings. Shaun Maloney was a constant threat twisting and turning Everton’s defenders inside out. In stark contrast Wigan’s defenders and on loan reserve keeper Joel Robles were imperious.

Just before full-time Everton did have a Kevin Mirallas goal disallowed for offside and substitute Ross Barkley fired wide from a good position, but by then Wigan’s progress to the semi final had already been confirmed.

Some commentators may point to Everton having an off day but a much more accurate analysis would be to give Wigan full credit for what was a superb team performance.

Latics had been the better side throughout the 94 minutes and thoroughly deserved to progress to what will be a very special occasion.

It is a fantastic achievement for a small town club with relatively limited resources to get to an FA Cup semi final. Roberto Martinez, his players and coaching staff deserve all the plaudits after such a brilliant display.

Wigan now face an intriguing game against Dave Whelan’s former club Blackburn Rovers or Millwall. The semi final against either of these Championship sides must give Latics a great chance of reaching the FA Cup final.