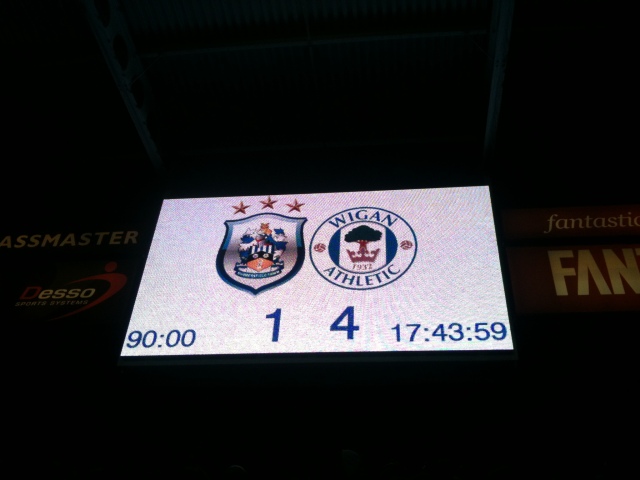 An outstanding first half display by Callum McManaman eased Wigan into the quarter finals of the FA Cup for only the second time in their history with an emphatic 4-1 victory at the John Smith’s Stadium on Sunday. The 21-year-old former Everton trainee scored the first goal and was instrumental in Arouna Kone’s second as the Latics took a firm grip of proceedings in the opening 45 minutes. Two further goals by James McArthur and Kone sealed a thoroughly professional performance by the away team.

Roberto Martinez continued with his strategy to rest his key players in the cup competitions and made seven changes from the recent Premier League fixture against Chelsea. Huddersfield had new manager Mark Robins making his debut in the dugout and looking to make an instant impact by creating a cup upset.

The Huddersfield Giants versus Wigan Warriors Rugby League game had taken place at the Stadium only 24 hours earlier and it must have concerned the Wigan manager that the uneven surface might have a detrimental effect on Latics normal passing game.

However, the concerns were unfounded as Wigan were able to move the ball around with some ease despite the bobbly surface. With Paul Scharner, Roman Golobart and Maynor Figueroa standing firm in defence and James McArthur, Fraser Fyvie and Roger Espinoza industrious in midfield Wigan had a platform to build the victory.

Wigan always looked sharp and as early as the fifth minute Jordi Gomez headed just over from a good position after excellent work by McManaman. The Liverpool born striker was a constant threat down the left hand side and it was no surprise when he gave Wigan the lead in the 30th minute.

Latics doubled their lead on 40 minutes when McManaman got to the by line before pulling the ball back to Gomez whose shot was blocked by Smithies but the ball fell to Arouna Kone who tapped the ball over the line from close range. Their was a suspicion of offside about the goal but it was no more than Wigan deserved after they had dominated the half.

The game was effectively over on 55 minutes when Wigan scored their third following an exquisite passing movement between McManaman, Gomez and McArthur. The Scottish international struck an unstoppable effort from 18 yards past the helpless Huddersfield keeper.

Wigan were comfortably in control, but on 61 minutes the Terriers pulled a goal back. Callum Woods produced a deep penetrative cross and substitute Lee Novak rose high above Figueroa to head powerfully past Joel Robles in the Wigan goal.

The home team did have a spell of possession but rarely threatened another goal. Wigan were excellent in possession and their constant movement caused numerous problems for the Huddersfield back line.

However, it was some sloppy Huddersfield defending which gifted Wigan a fourth goal and sealed their progress into the quarter finals to face either Everton or Oldham Athletic. Smithies played the ball out to Anthony Gerrard on the edge of his own box but the defender seemed to switch off momentarily and allowed Kone to dispossess him before the Ivorian fired an unstoppable shot high into the Huddersfield net.

This cup victory and the manner in which it was achieved will have given the team a huge confidence boost and it could be just the catalyst they need to reinvigorate their fight against relegation. The excellent progress of fringe players such as McManaman, Golobart and Fyvie in the cup can only be beneficial and create greater competition for starting places in the upcoming Premier League fixtures.