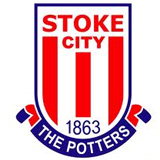 Wigan produced a brilliant second half fight back to hold Stoke City 2-2 at the Britannia Stadium and move themselves out of the relegation zone. The Potters had cruised to a 2-0 lead with goals by Ryan Shawcross and Peter Crouch but the Latics dominated the second period and drew level with goals by James McArthur and Franco Di Santo. The Argentinian striker could even have won it for Wigan in the dying minutes when he guided his effort just wide of the post.

Wigan gave full Premier League debuts to Roman Golobart in defence and Roger Espinoza in midfield and Stoke manager Tony Pulis named the same side that had been beaten by Swansea in their last Premier League game.

The first major action of the game resulted in a clash of heads between Robert Huth and Franco Di Santo and both players had to complete majority of the game with white bandages protecting their damaged heads.

Both teams found it difficult to settle and both sets of players were giving the ball away far too easily.

Stoke’s long ball tactics contrasts markedly with Wigan’s more considered short passing approach. However, the home team’s tactics paid dividends when they fortuitously took the lead in the 23rd minute. A high free kick into the box was inadvertently headed by Jean Beausejour into the back of James McCarthy’s head and the ball fell invitingly to Ryan Shawcross who guided the ball past Ali Al Habsi.

Stoke were lifted by the goal and continued to knock long balls to their big target men Crouch and Jon Walters. Referee Mike Jones produced some erratic decision making which didn’t help the flow of the game and this was a source of much frustration for both managers.

The Latics were also guilty of giving away free kicks in dangerous positions around their own penalty box and the Potters sensed they could profit from the resulting set pieces.

Wigan did create a few half chances as the game progressed, Beausejour evaded his marker and drove his cross towards James McArthur but the Scot flashed his shot wide of the post. Then the Chilean wing back put in another whipped cross and the Stoke keeper Asmir Begovic spilled the ball in the box but none of Wigan’s attackers could capitalise.

Roger Espinoza was harshly booked by referee Jones for a foul on Matthew Etherington and Wigan suffered another setback when Emmerson Boyce limped off with a hamstring strain right on half time and had to be replaced by Ronnie Stam.

Roberto Martinez would have to work his magic during the half time interval if his team were going to get something from the game.  The first half showing had been way below what is expected and it was looking as though Stoke would have a comfortable victory.

But things were to get worse for Wigan at the beginning of the second half before they got better, Espinoza lost the ball inside the Potters penalty area and the loose ball was quickly cleared to Charlie Adam in the middle of the pitch, the Scot raced away from two defenders and fired a low shot towards the bottom corner. Al-Habsi could only parry the ball to Crouch who had the simple job of tapping the ball into the open goal.

Wigan responded immediately with a stunning goal on 50 minutes, Espinoza produced a great pass between two defenders and McArthur raced through before hitting the ball with the outside of his right foot to beat Begovic.

Shaun Maloney put the ball in the Stoke net on 56 minutes after good work by Maynor Figueroa but he was adjudged to be marginally offside.

Espinoza was starting to have a major impact on the game, often winning the ball back from his opponents and creating good opportunities for his team mates.

Wigan drew level on 61 minutes when Espinoza clipped the ball towards the back of the area for McCarthy, who headed across the face of goal for Di Santo to volley home from six yards.

Latics were now well on top with McArthur and Maloney causing problems for the home defence, Begovic had to dive at full stretch to keep out a testing effort from McArthur, while the Bosnian keeper also did well to keep out Maloney’s curled effort.

Wigan were dominating possession and camped in the Stoke half and the home team were finding it increasingly difficult to get the ball off their opponents.

Stoke were threatening on the breakaway and substitute Cameron Jerome should have done better when he broke into the Wigan box but he fired his shot wide of Al Habsi’s left hand post.

But Wigan had the final opportunity to grab all three points when Maloney curled a superb cross into the path of Di Santo but the Argentinian international couldn’t quite guide the ball into the Stoke goal.

It was a great second half performance by Wigan, if only they had played the same way in the first half they would surely have taken all three points.