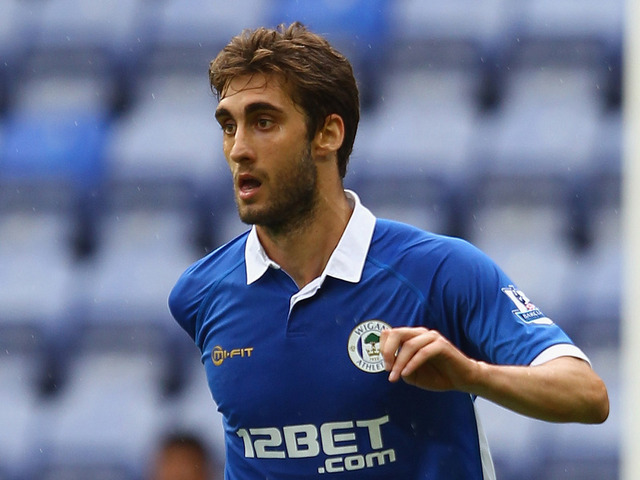 Adrian Lopez limped off with a hamstring injury

Norwich City secured their fifth successive home win and remain unbeaten in ten games after edging out injury hit Wigan Athletic 2-1 at Carrow Road. The Latics had started the game without three centre backs and finished the game with ten men after Adrian Lopez pulled up with what appeared to be a hamstring strain. Earlier Irish international James McCarthy had limped off at half time with a foot injury.

Wigan put in a very disappointing first half performance and went 1-0 down on 16 minutes and they could have been at least three goals down at half time if it hadn’t been for some profligate finishing by the Canaries and some good saves by Ali Al Habsi.

Wigan’s build up play could be described as patient but it would be more accurate to say it was pedestrian. Norwich were much quicker in their progress and Wes Hoolahan, Grant Holt and Anthony Pilkington all had good chances for the home side.

When in possession Wigan gave the ball away far too easily and were unable to close down their opponents when defending. Norwich in contrast passed the ball with efficiency and worked hard to get the ball back.

After a scrappy first fifteen minutes, Norwich took the lead following a mistake by Wigan’s captain Emmerson Boyce. The defender dwelled on the ball on the edge of his own box and Wes Hoolahan dispossessed him before passing to Anthony Pilkington who rifled his shot past Al Habsi.

The Wigan bench was further incensed minutes later when Norwich’s Bradley Johnson appeared to stamp on James McCarthy’s foot. The Canaries midfielder was booked for the offence but McCarthy struggled with the injury for the remainder of the half.

Norwich could have increased their lead when Al Habsi missed Snodgrass’s deep cross but Pilkington inexplicably fired wide. Soon afterwards the Wigan keeper produced an outstanding reflex save to deny a goal bound Snodgrass header. Latics went into the break mightily relieved to be only one goal down.

Roberto Martinez replaced the injured McCarthy and Jordi Gomez during the interval and introduced David Jones and Shaun Maloney. The Scottish international Maloney made an instant impact on 51 minutes when he fired home the equaliser from the edge of the box after brilliant work by Arouna Kone.

Wigan were now on top and controlling possession, Maynor Figueroa had a long range effort which drew a fine save from the Norwich keeper Bunn and Maloney played an exquisite cross which just evaded Mauro Boselli and Kone.

Just when it was looking like the away side would snatch an unlikely victory another mistake by the usually reliable Boyce resulted in Norwich regaining the lead. The Barbadian defender let Pilkington turn far too easily on the edge of the box and the former Huddersfield Town player provide a perfect chip for Wes Hoolahan to head past Al Habsi.

Wigan huffed and puffed but rarely threatened an equaliser until the dying minutes when the hard working Kone was played in by substitute Franco Di Santo, but a great last ditch tackle by Sebastien Bassong denied the Ivorian a goal.

As the game ticked towards the final whistle Adrian Lopez pulled up with what looked like a hamstring strain and Wigan played out the final seconds with ten men.

Wigan’s poor first half showing had been their undoing, if they had not been so far off the pace in the first half they might have got something from the game.

Credit must go to Norwich however, who played with some style and vigour and deservedly took the three points, which moved them up to the heady heights of seventh in the table.

Wigan’s injury crisis continues to get worse with both McCarthy and Lopez unlikely to be available for the difficult upcoming games against Arsenal and Everton. It is fair to say that the squad is looking decidedly thin and the immediate prospects are not looking good. A quick return for some of our long term injuries is now a necessity if we are to gain some points over the Christmas period.