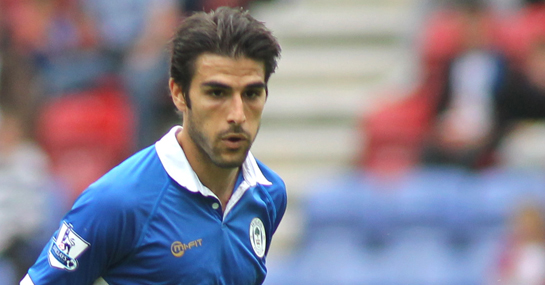 The much maligned midfielder Jordi Gomez scored a superb hat-trick in Wigan’s exhilarating 3-2 win against a resilient Reading at the DW Stadium. Often the scapegoat if Wigan struggle, the Spaniard scored three second-half goals to secure a vital home win for a depleted line-up.

Latics started the game without several key players including Captain Gary Caldwell and during the game they lost midfielder Shaun Maloney and centre back Ivan Ramis.

Reading had been buoyed by their first win of the season last week at home to Everton, and started the game well, matching the home side for shots and possession. They took the lead on 35 minutes when Sean Morrison rose high above the Wigan defence to meet a powerful free kick by Nicky Shorey and head into the top corner.

Despite Reading being ahead, Wigan had created the more clear-cut opportunities with Arouna Kone heading wide after good work by Jean Beausejour and then after rounding keeper Adam Federici the Ivorian’s effort was cleared off the line. Later Gomez produced a great piece of skill to wrong foot the Reading defence but his shot was too high. It’s fair to say that Gomez was having a mixed first half, as when in possession he was prone to give the ball away too easily, but the jeers from some of the home crowd were undeserved.

His second half performance however, was nothing short of remarkable. On 58 minutes impact substitute Franco Di Santo set-up Gomez and despite having his first shot saved by keeper Federici he reacted quickly to fire high into the net.

The end to end action was far from over however, and Ali Al Habsi was called into action when he produced a world-class reaction save to deny Adam Le Fondre’s header.

The Royals did equalise with a freakish goal. Hal Robson Kanu’s shot was partially blocked by David Jones but the ball looped upwards towards the Wigan goal before dropping between Ali Al Habsi’s gloves and the cross-bar, hitting the keeper in the process and crossing the line. It looked as though this freakish goal would gift Reading a point in a game Wigan had dominated.

But the action was not over and Gomez then had a chance to get his third goal when his volley was cleared off the line by Morrison. The former Swansea, Espanyol and Barcelona player did get his hat-trick and Wigan’s winner in injury-time following a flowing counter-attack. He picked up the ball in his own half and his astute pass found Kone who returned the ball for the Spaniard in the penalty area to claim his hat-trick with a composed finish.

Despite having an inconsistent first half Gomez had been at the centre of all Wigan’s best moves and fully deserved his three goals. He had scored with his left and right foot and a diving header which can only be regarded as the perfect hat-trick.

He is only the second Spanish player (along with Fernando Torres) ever to score a hat trick in the Premier League and only the third ever Wigan player to do so.

Overall it had been an exciting end-to-end encounter spoiled only by some poor decisions by the match officials. Referee Howard Webb and his assistants didn’t have the best of afternoons often leaving both sets of fans incredulous. Reading had a fair shout for a penalty when Jay Tabb collided with Maynor Figueroa’s outstretched leg in the box and Franco Di Santo had a perfectly good goal disallowed for offside.