Posted on October 7, 2012 by ianhaspinall 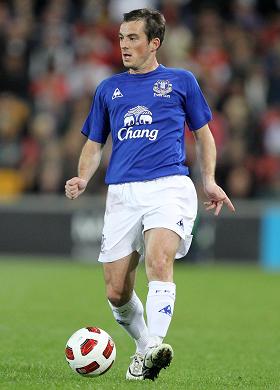 Former Latic Leighton Baines rescued a point for Everton with a late penalty at the DW Stadium on Saturday. Left back Baines rifled home the spot kick on 85 minutes after Maynor Figueroa brought down Kevin Mirallas. Wigan had been on top in the first half with some determined attacking play and had twice taken the lead but on each occasion their lead was clawed back by a strong David Moyes team.

The match started in thrilling fashion with Wigan taking the lead on 10 minutes when Shaun Maloney jinked his way into the Everton box before crossing for Arouna Kone to head home from a yard out. The Everton defenders had a fair shout for offside but the goal was given by referee Kevin Friend.

It did not take long for Everton to equalise however, after a mis hit shot by Steven Pienaar became a great cross for Nikica Jelavić and the Croatian international headed home in clinical fashion.

It was end to end action now and Wigan took the lead on 23 minutes after good work by Kone. The Ivorian powered past the Everton defenders and when he got to the by line he cut the ball back to Franco Di Santo who provided an emphatic finish past Tim Howard.

Everton responded when Leon Osman’s deflected shot was superbly saved by Ali Al Habsi, but Wigan had been the dominant side in the first half with strikers Arouna Kone,  Franco Di Santo and Shaun Maloney proving a handful for the Everton back line, while James McCarthy and James McArthur were winning the majority of battles in midfield.

The half ended in controversy when Marouane Fellaini caught Maynor Figueroa in the face with his arm during an aerial challenge. The Belgian was lucky to stay on the field especially after he had earlier swung a kick at Gary Caldwell in the area, but referee Friend only issued a yellow card.

At half-time David Moyes decided to counter Wigan’s advantage by substituting defender John Heitinga, who was having a torrid time, and replacing him with Sylvain Distin. He also made the tactical decision to drop Fellaini back into midfield to counteract Wigan’s dominance.

Early in the second half Kevin Morallas had a couple of opportunities to draw Everton level when he fired over the bar and then drew a good save from Al Habsi, but Wigan were not to be outdone and only a last-ditch tackle by Phil Jagielka prevented Kone from making it 3-1.

As the game moved towards full-time it was looking as though Wigan had done enough to get the  victory, but after Gary Caldwell looked to have fouled Victor Anichebe the ball broke free and Figueroa brought down Mirallas giving the referee no option but to give a penalty.

It was frustrating for the Latics fans that the former Wigan favourite Baines stepped forward and converted the penalty. Baines has now scored three times against Wigan since transferring to the Toffees. I’m sure that Baines will always be well liked at the DW Stadium but it would be greatly appreciated if he could just stop scoring against us.

In the dying seconds Wigan had a chance to win it when after another typically twisting run by Maloney, his deflected shot looped inches over the cross-bar to deny the home team victory.

Overall it had been a very good performance by Wigan, the level of intensity was an improvement on recent games and this must have been pleasing for manager Roberto Martinez. The forwards are firing and the midfield is combative. If we can tighten up at the back then progress can be made up the table. The result should be regarded as positive given that we were up against an excellent Everton team who will be in contention for a top six spot this season.