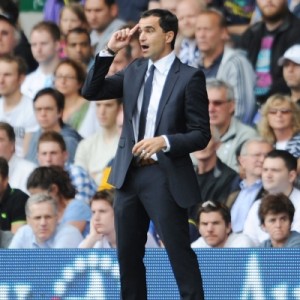 Two key decisions by the linesman robbed Wigan Athletic of at least a point at Stamford Bridge which would have taken them out of the relegation zone. It is hard enough for a team like Wigan to go to a Champions League team like Chelsea and get a result but when you have to play the officials as well it makes it near impossible.

Wigan retained the same starting eleven that had outplayed Stoke City while Chelsea’s strength in-depth was for all to see as they made seven changes from their win over Benfica.

Wigan started the game competitively and there was little to separate the two sides in the opening half despite the difference in league positions.

Chelsea did create a great chance on 38 minutes when Juan Mata twisted and turned inside the Wigan area before bringing a good save from Ali Al Habsi. The rebound fell to Didier Drogba who headed towards goal but the danger was well cleared by Maynor Figueroa.

Just before half time Drogba had another opportunity when his header Al Habsi’s legs and the ball went over the cross bar. But Wigan were holding their own, closing down the opposition and playing some neat football.

As the teams went in at half time there was a belief in the Wigan camp that they could go on to achieve at least a point.

The opening stages of the second half did nothing to discourage Wigan’s belief and the home crowd were getting increasingly frustrated by Chelsea’s lack of progress. It was no surprise when Fernando Torres was introduced for the ineffective Florent Malouda on the hour-mark.

In the 62nd minute they took the lead in controversial circumstances. Juan Mata’s initial free kick was cleared, Raul Meireles returned the ball into the box but as the Wigan defence stepped out Branislav Ivanovic was clearly standing in a offside position as he finished. Uncharacteristically the whole Wigan team surrounded the linesman but he insisted the goal should stand and referee Mike Jones agreed.

Almost immediately Wigan had the chance to equalise, Victor Moses broke into the Chelsea box before playing the ball sideways to Franco Di Santo whose shot managed to beat keeper Petr Cech but the ball was cleared off the line by Ivanovic.

On 71 minutes Roberto Martinez introduced Mohammed Diame and Ben Watson for James McArthur and Jean Beausejour as Wigan pushed to get the equaliser.

On 82 minutes they drew level when Diame unleashed an unstoppable left foot drive from the edge of the box past Cech. It was no more than Wigan deserved, but they were to be undone in stoppage time as the linesman once again made a mistake.

Gary Caldwell went forward hoping to grab the winner for Wigan, as he had done at Liverpool, but this time he failed to bring the ball under control from six yards out and the chance was wasted. Chelsea broke towards the Wigan goal and Torres cross shot came off the base of the post and fell to Mata who turned the ball into the net from a offside position.  It was a closer decision than the first goal but it was still clearly offside. Wigan had been undone not by a better team but by a desperately poor linesman.

Wigan manager Roberto Martinez interviewed after the game said the decisions were disgusting. He said of the offside decisions “People keep asking: Is it time to bring in technology? No, it’s time to bring in referees and linesmen who know the laws of the game.”

Both goals were clearly offside and the first goal in particular was so far offside that it is hard to comprehend how the linesman did not flag. Wigan’s sense of injustice is acute.

So far this season Wigan have had to endure some terrible decisions by referees and linesmen. The Blackburn corner that Pedersen played to himself before they scored, the Conor Sammon sending off at Old Trafford that wasn’t and now two offside goals for Chelsea. It is hard not to feel that there is a conspiracy to get Wigan relegated from the Premier League this season, I’m hoping I will be proved wrong.