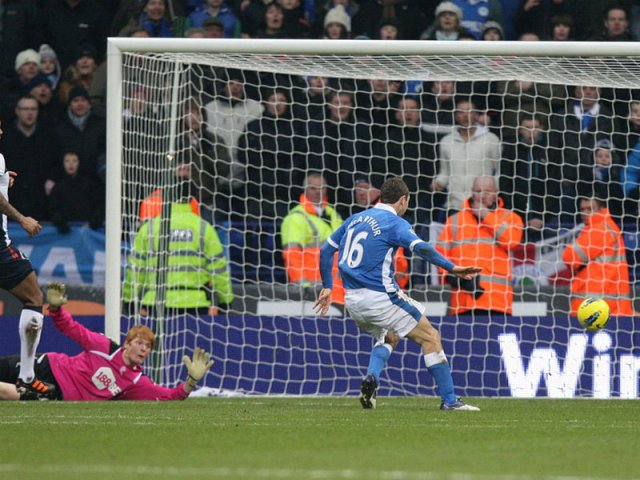 James McArthur gets the winner

A great box-to-box performance by James McArthur was the driving force in a deserved win for Wigan at their local rivals Bolton. McArthur epitomised the Wigan spirit when after spurning one great opportunity his persistance paid off as he grabbed the winning goal.

It was a crucial result for Latics as defeat would have set them adrift at the foot of the table. Now with 13 games remaining only two points separate the bottom five teams.

Bolton started the game the brighter and Wigan’s defence looked shaky in the opening minutes as Gary Caldwell nearly turned the ball into his own net from a Martin Petrov cross and soon after he survived a hand ball appeal.

But as the first half progressed Wigan gained in confidence and soon started to dominate possession and create chances. They were a much more determined outfit than in recent weeks and the players showed they are prepared to fight for their Premier League lives.

In Wigan’s first serious attack Victor Moses weaved his way into the Bolton area and fired into the side netting. Soon after Franco Di Santo’s long-range effort sailed just over the cross-bar and James McArthur shot wide before Latics deservedly took the lead.

Jean Beausejour’s corner was met by a well-directed header by Gary Caldwell and the Wigan faithful celebrated in somewhat untypical fashion with flares and smoke emanating from behind the goal.

This was a very hardworking Latics performance with Franco Di Santo battling and robust upfront, James McArthur and McCarthy fiercely competitive in midfield, closing down the Bolton attacks and getting into the opposition box whenever possible.

The second half continued with Wigan in control and they should have increased their lead on 60 minutes when Moses cut into the box and presented McArthur with a golden chance but his side footed shot went straight at Adam Bogdan.

It looked like the miss might be crucial when in the 67th minute Bolton equalised. A long clearance by Bogdan hit the back of David N’Gog and Mark Davies superb shot flew into the top corner of the Wigan net.

The goal was against the run of play but many Wigan fans must have feared that their inability to finish off their opponents would once again be their downfall.

However, on this occasion Wigan got their just rewards. From a good position Victor Moses shot straight at Bogdan who could only parry his shot into the path of McArthur who this time made no mistake.

Wigan held out for a desperately needed victory but not before their perennial hero Ali Al Habsi had made a miraculous save from substitute Ryo Miyaichi.

Wigan now go into their next home game against Aston Villa in two weeks time with renewed confidence and a real belief that the great escape is still possible.