The best value Season Ticket deal in the Premier League 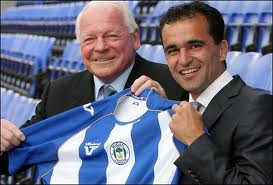 Whelan and Martinez - a great team

With Roberto Martinez now confirmed at the helm of the good ship Wigan Athletic, it is now time for all football fans in Wigan to get behind the club and show your support.

Under Martinez Wigan will look to push on next season and establish themselves as a top ten team. They will continue to play the same attractive passing game, which has gained many plaudits (apart from Mark Lawrenson) and this can only augur well for the future of the club.

Latics already have some exciting young players and I’m expecting Roberto to add to these over the close season. Roberto wants to establish a footballing dynasty at the club along the same lines as Barcelona legends Johan Cruyff and Pep Guardiola.

Come and join a club which is developing and progressing in the right way under Roberto Martinez and Dave Whelan.

Wigan – One Adult and One Child £270 ie £14.21 per Premier League game + Under 5’s Free. A fantastic price for a Premier League season ticket for an adult and one child. If you are already a season ticket holder it’s actually only going to cost £250 to renew ie £13.16 a game.