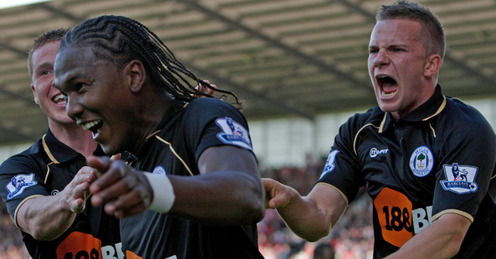 We did it! We stayed up! What an absolutely incredible finale to the season, with 13 minutes to go we were in the relegation zone, but a Manchester United goal against Blackpool and then Hugo Rodallega’s 78th minute headed goal made us safe.

The post match celebrations were something to behold, Roberto being bounced in the air by the players and then throwing his lucky jacket to the fans, wallet included! Dave Whelan showered in Champagne by Hugo and then warmly embraced by Roberto.

Little Wigan had proved all the doubters wrong and we can now look forward to a seventh season in the Premier League.

When I started writing this blog at the beginning of February Wigan sat second bottom of the league and had not won in 2011, and yet I still believed we could escape. Some may say this was blind faith, but I thought we could do it because we have some excellent young players, a great team spirit and one of the best young managers around in Roberto Martinez.

Roberto is a very intelligent manager, he has some very strong beliefs and he always wants his team to play football in the right way.

Roberto supports his players and gives them confidence, he does not criticise his players in public and he engenders a great team spirit. Some say he overly accentuates the positive but I think this gives players the belief that they can achieve great things. He always seems cool and calm, even under the most intense pressure, his decision-making during the final two games of the season were exemplary.

He wants to play football on the floor, pass and move – yes like Barcelona (although we are not at that level), he wants to build a team of young players who will go onto great success. His long-term plan is to establish Wigan as a Premier League force and to constantly improve the club’s status. He always has the best interests of the club at heart.

Now that we have stayed up, I think he will go on to establish the club higher up the table, the current crop of young players and the excellent youth policy means that the club has a very bright future ahead.