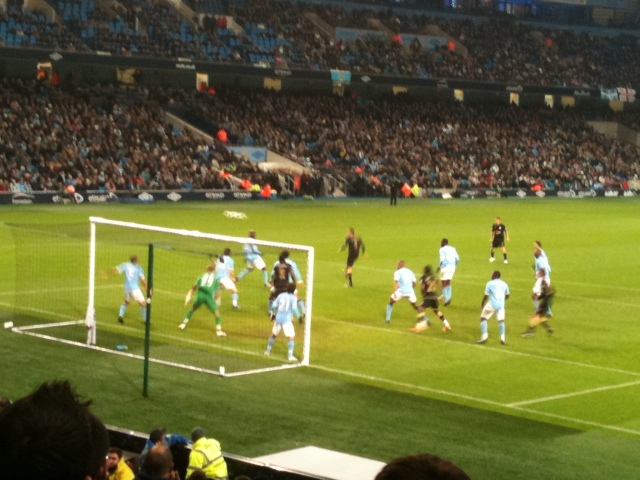 Wigan deserved at least a point from Saturday’s game at Manchester City, but yet again it ended in heroic defeat for the Latics. Wigan matched their wealthy neighbours throughout and if it was not for an uncharacteristic goalkeeping error by Ali Al Habsi we would all be celebrating.

The first half was fairly even, with City probably creating the greater number of chances although James McCarthy had an excellent opportunity to score for Wigan. The City goal came as a result of some indecisive defending. Wigan backed off David Silva and as he moved towards goal Lopez slipped allowing him the freedom to get in his shot, Al Habsi was in a good position but inexplicably let the ball through his hands, legs and over the line.

The second half was all Wigan and even the most biased City supporters would accept that City had a lucky escape. Wigan dominated possession for long periods and expertly moved the ball from side to side alternating the point of attack and creating numerous chances. Alcaraz struck a post from Watson’s corner, Hart made a smart save from McCarthy’s piledriver and Rodallega shot tamely from an excellent scoring position. Then in the final seconds substitute Conor Sammon making his debut shot wide when he looked odds-on to score. The sense of frustration from the Wigan supporters behind the goal was all too evident.

Wigan still sit bottom of the league and now have nine ‘cup finals’ to redeem themselves. Four home games against Birmingham, Tottenham, Everton and West Ham and five away games at Chelsea, Blackpool, Sunderland, Aston Villa and Stoke, does not look an easy run in. Many pundits have speculated about the number of points required to stay up this season. Four wins and a draw from the remaining games would take us to 40 points, but this may not be enough and a target of 41 or even 42 may be required.

Wigan are currently in a training camp at La Manga in Spain and have two weeks rest and recuperation before the Birmingham game, this period could be crucial for Roberto Martinez to gather his troops and prepare his strategy for staying up.

Will he adjust his formation for the remaining games and adopt a more positive approach, for example 4-4-2 with possibly Rodallega teaming up with Sammon, or will he persist with his current approach of one central attacker? I personally would like to see him use Sammon and Rodallega against Birmingham, although I would not necessarily expect the same formation against Spurs. Whatever team he selects it is certainly a time for all of us, the Manager, the team and the supporters to be brave. As Roberto says ‘Sin Miedo’ (Without Fear).

1 Response to City defeat and nine cup finals ahead